Market watchers are concerned with a mysterious biography about the ex-president of the USA. It ranks exceptionally well on Amazon, but nobody knows where exactly it comes from. The suspicion: The top seller at Amazon was written by a computer program – and not badly.

Various titles about the first black US president are fighting for places on the Amazon hit list. First of all, there are the 751-page memoirs entitled “A Promised Land”, which Barack Obama wrote himself. And then there’s “Barack Obama – The Biography” by an author named University Press on the list. It even ranks as the number 1 best seller in the “Political Leadership” category. And it is listed very near the front if you enter “Barack Obama Book” in the search.

Don’t miss anything: The t3n newsletter on your favorite topics! Register now
Table Of Contents hide
1. An AI finds the right tone
1.1. Most read

An AI finds the right tone

The US editor Eric Nelson first noticed the product. It’s not a book at all, but an SEO maneuver by a shadow company that lives on quickie biographies and $ 2.99 imitations. Then Slate editor Dan Kois bought the work and read it. According to his own statement, it took 20 minutes. His impression: He doesn’t believe that this book was written by a person. But he has to admit, “the AI ​​that eliminated it made some sensible comments about Barack Obama.”

How dumb are we as a nation? This amazing, probably AI created nonbook is # 173 on Amazon. https://t.co/uPymPqT3ou

In addition to illegible sentences, the “author” produced some errors in the context. Kois isn’t sure yet if he’s dealing with a confused human or an AI. He has the text tested. The Giant Language Model Test Room (GLTR) is a project on which the MIT-IBM Watson AI Lab and Havard University collaborated. It helps in the identification of AI written texts. It does this by using common algorithms and calculating the probability of the words used. The more unusual the terms, the more likely a human writer has put them on paper.

The program colors parts of sentences and terms green and yellow as they would have been used by an artificial intelligence. The test turns out as expected: The paragraph shown has only three red words, the rest of them shine in the said colors.

Kois contrasts the real biography of the ex-president and the rate of red or even purple terms increases visibly. 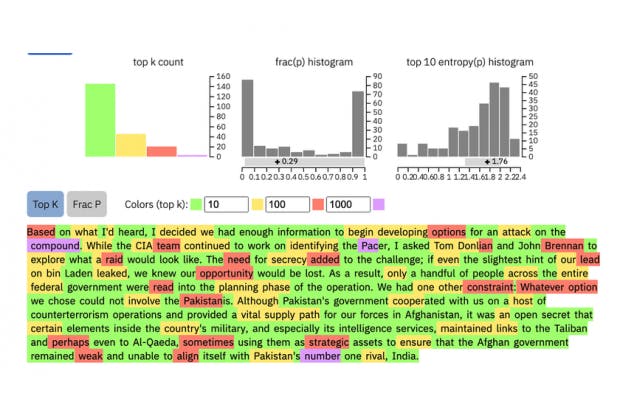 Kois’ conclusion: He sees the success of the non-book as evidence of how deep the US has sunk. On the other hand, he blames the market for it: “The market shouted after a very brief, almost literary torrent of words about famous personalities. Thank god someone – or something – got up to deliver it to them. “

Kois attributes the fact that the work ranks so well despite its deficiencies in content to search engine optimization and sponsored list positions.

The best extensions for the popular CMS

Streaming portals in the SEO check: Amazon depends on Netflix