In the UK, Amazon customers have reported that the box contents of their PlayStation 5 orders have been stolen or replaced. The reports have been published on social networks, such as on Twitter, and in forums, such as on Reddit. The PlayStation 5 was launched in Brazil on Thursday (19), as it was in the United Kingdom.

The reports, in most cases, are followed by images. A user posted on Twitter that he received a 5 kg rice packet in a cardboard box. “I went to open my PlayStation 5 that I bought from @AmazonUK and found it! Someone replaced it with rice!”. Another user showed that she received cat food instead of the console.

On Reddit, user “u / Adgej123” reported that his order had been dispatched yesterday and was on its way. He said he tracked the driver and saw “that he was a few houses away on the map.” According to him, the van arrived and parked, but the driver “paused for 10 seconds and then left”. At Amazon, it was reported that the delivery had been made. The company said he should wait 48 hours for an investigation.

A similar case was also reported by Will Judd, who writes for the Eurogamer. According to him, the delivery was marked as delivered to a neighbor, who reportedly said the package should be delivered directly to Judd. The delivery man, from an outsourced company, ended up leaving with the package. 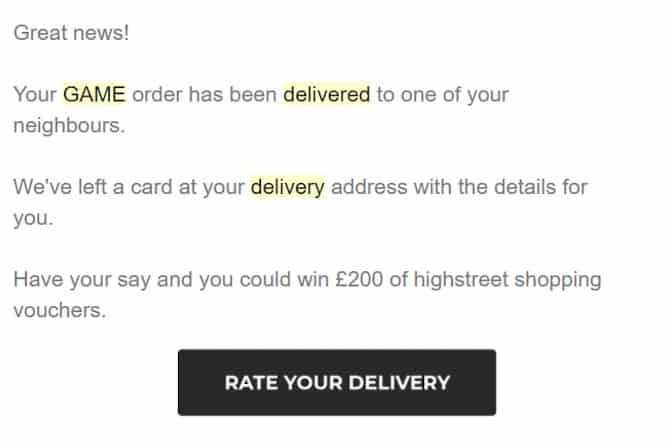 Also on Twitter, a user claims that the delivery was marked as made on Amazon, but his home never arrived. Image: Will Judd / Reproduction

In a statement, Amazon acknowledged the problems with delivery of the PlayStation 5 and promised to fix all cases. “We are very sorry for this and we are investigating exactly what happened,” wrote a spokesman. The company also cited that the problem in question affected “a small part of these requests”.

The company asks UK customers who have experienced delivery problems to contact for help.