The Dumont Observatory, located in Patos de Minas (MG) and operated by the amateur astronomer Gilberto de Melo Dumont, spotted new spots on the surface of the Sun – so large that hold ten Earth planets placed side by side. This solar activity is expected at the beginning of the new star cycle.

The photos were taken this Friday (6th) by Gilberto himself, using a planarometric camera connected in primary focus to one of the observatory’s telescopes, with a 200 mm aperture. A specific sunscreen was also used for this type of observation. The spot, called AR 2781, has been active since last Tuesday (3).

The Sun goes through cycles of activity approximately every 11 years, and as its activity increases, more spots cross its surface. It is these spots that give rise to solar flares, such as coronal mass ejection or the release of radiation and particles charged by the Solar System.

The effect of this here on Earth varies from the occurrence of northern lights, interference in our satellite system to the disconnection of the electrical network on the ground. The alternation between cycles caused by the gradual change in the Sun’s magnetic field – as the star rotates approximately once every 27 days, its internal material acts like a fluid, so its equator rotates much faster than its poles.

This rotation causes its powerful magnetic fields to become progressively more “tangled” – and its sunspots and other magnetic activities more violent – until the entire star inverts its magnetic polarity. as if the Earth changed its North and South magnetic poles every few years.

Visible sunspots are caused by magnetic disturbances that displace their shiny outer layer and reveal the slightly cooler (and darker) inner layers. The stains can last for days or weeks and vary in size, but they are usually much larger than the entire Earth. 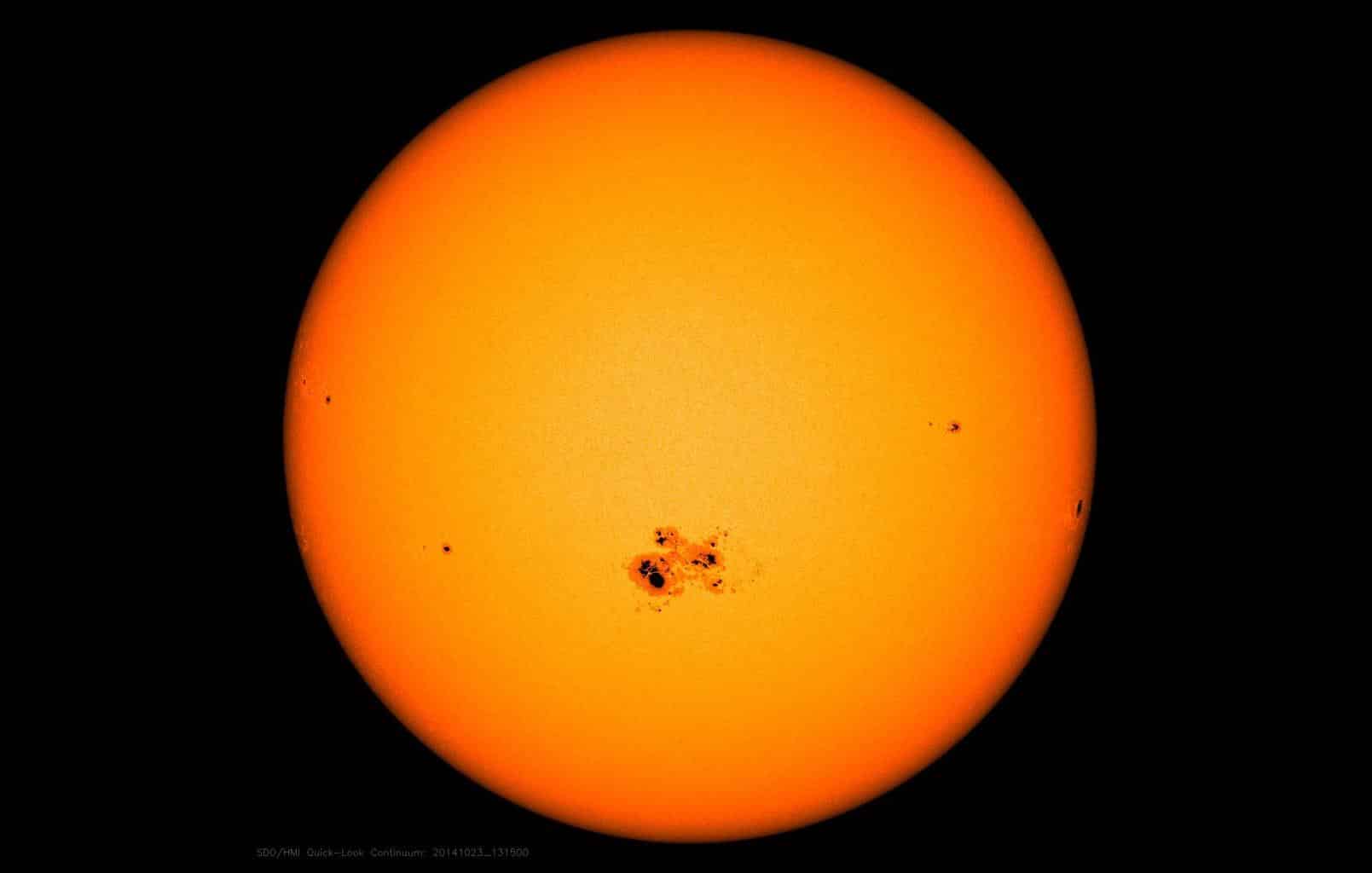 A gigantic sunspot – almost 128,000 kilometers wide – could be seen in the lower center of the Sun at the beginning of the year, in this image made by NASA’s Solar Dynamic Observatory. Image: Nasa / SDO

“The spots have a large and concentrated magnetic field, keeping the matter in the form of plasma, that is, a state of the matter hot and electrically charged”, explains Gilberto. “Almost a year ago they practically did not appear, and when they did they were quite small”, completes the amateur astronomer.

Such prolonged periods without sunspots usually happen at the time of the so-called “minimum solar” – the time of least sunspot activity between two suns cycles. The changing polarity of the Sun causes its magnetic activity – and its sunspots – to decrease significantly. But the Sun’s rotating magnetic field slowly becomes entangled again and the sunspot cycle begins again.

Cycle 25 is now expected to peak in 2024, before dropping to a new low in 2031. Since the last solar minimum in 2009, scientists have gained new tools for studying solar activity, including the Parker probe from NASA, which has been orbiting the Sun since 2018. With the data collected in the current cycle change, we can possibly better predict the next ones.