It looks like it’s not yet. The new smartphones in Huawei’s Mate range, namely the Huawei Mate 40 and Mate 40 Pro, will not bring the long-awaited front camera inside the screen. The information was given by a leaker on the Chinese social network Weibo.

Some rumors pointed out that Huawei was the first manufacturer to implement the new technology, however, it seems that Huawei Mate 40 will not be able to mark the market with this feat. The camera under the smartphone screen is one of the most coveted technologies in the industry. 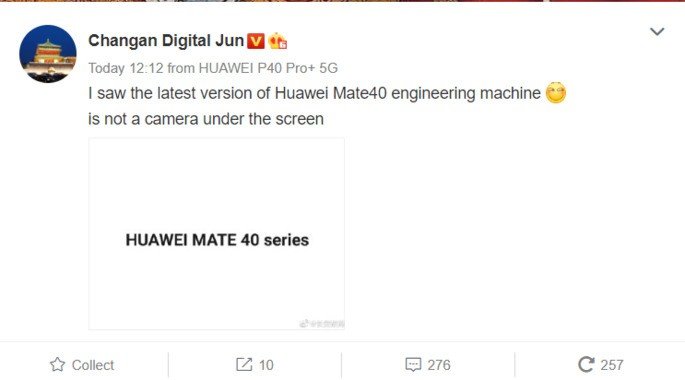 This is because it is the ultimate alternative to notch, holes or pop-up cameras. The most recurrent trend in the world of smartphones is to try to create a device with 100% screen usage, without visual intrusions. The only way to keep the front camera this way is to place it under the screen.

Manufacturers like Huawei, Xiaomi and Oppo are already “playing” with this technology. Everything indicated that the Mate 40 Pro would be the first to debut the technology, but apparently it will not be so. However, Huawei may still be the first manufacturer to present a device with the desired camera.

Table Of Contents hide
1. Huawei Mate 40 Pro expected to come close to the end of the year
1.1. Share this:
1.2. Related

As a rule, Huawei usually presents the Mate line in September or October. However, as the company is suffering from US sanctions and the global pandemic, only time will tell when the Chinese manufacturer will launch the equipment. It remains to be seen whether we will have a Lite version.

Google marks event for next month! Google Chromecast and more on the way