PUBG Mobile has long been at the top of the list of the most popular games for smartphones. Now, the latest report from Sensor Tower reveals that this popularity also translates into mind-boggling revenue, especially in 2020. Since it was launched in 2018, the game has accumulated more than 2.6 billion euros.

Most importantly, during the first 6 months of this year, they have managed to double revenue with revenues above € 1 billion. However, we must note that these figures include revenues from PUBG Mobile and Game For Peace (Chinese version). 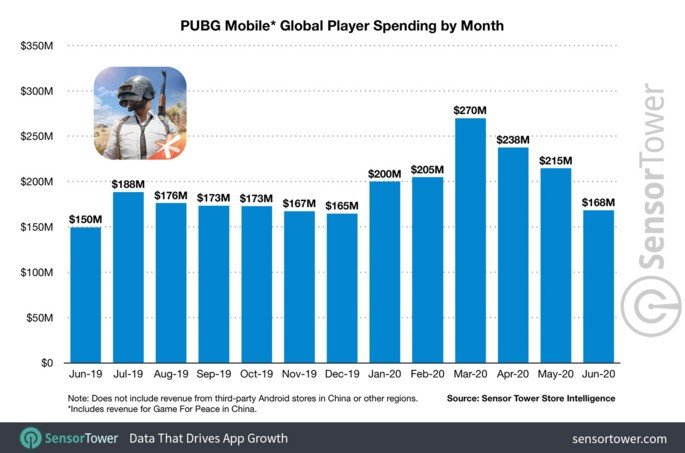 Table Of Contents hide
1. PUBG Mobile has 4x revenues higher than its rivals
2. Players on iOS spend much more money than on Android

PUBG Mobile has 4x revenues higher than its rivals

During the first 6 months of this year, the world’s revenues mobile gaming in general they shot, thanks to the quarantine imposed due to COVID-19. Still, PUBG Mobile left rivals miles away, with Garena Free Fire second with “only” 267 million euros.

In 3rd and 4th place are Knives Out and Call of Duty: Mobile, with revenues in the order of 231 and 195 million euros respectively.

There is no doubt that the global quarantine turned out to be largely responsible for the huge spike in revenue volume. In the case of PUBG Mobile, their best month was March, where they achieved a total of 240 million euros.

Players on iOS spend much more money than on Android

The report published by Sensor Tower also gives us a lot of information about the platforms where PUBG Mobile is present. Over the years it has been proven on several occasions that iOS users spend more money than those using Android devices.

READ MORE  Why will it not be possible to download WhatsApp on some cell phones in 2021?

However, the great disparity presented on PUBG Mobile can be impressive. Purchases made through the App Store account for an overwhelming 79% of revenue, leaving only 21% for Android users. Interestingly, accounts associated with Google Play account for 65% of the number of installations and only 35% for the App Store.