No matter if old or young – playing together is fun for all generations. Children in particular can train their social skills early on with good board games and train their thinking skills and motor skills. We have selected the most beautiful board games for children from the age of five and subjected them to a test.


Germany plays. The demand for games in all generations has been growing for years: in 2018 alone, more than 50 million games were sold in Germany. The game publishers have reacted to the trend and regularly bring new, exciting board games onto the market. The number of new publications is so huge that it is difficult to keep track of them.

In the test: good games for children aged five and over

We have put together a selection of the best current games for you and tested children’s games that are suitable for children from five or seven years of age.

Who plays, learns – playfully in the truest sense of the word. Especially for children at an age when they switch from kindergarten to school, it is important to train social skills and improve their dexterity. When playing with friends, parents and family, this happens quite by the way, the child’s development is optimally promoted through regular play.

Special movement and skill games also train the little ones’ motor skills. Learning games, for example language learning games or arithmetic games, help to expand and deepen the knowledge you have acquired. The best games for kids can do all of this.

Here are the latest children’s games that we have tested exclusively for you: 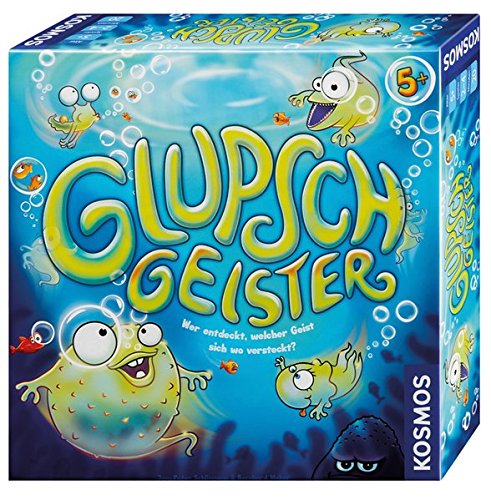 In the deep sea, the cheeky bulging spirits are up to mischief. Two to four players have to catch the ghosts and bring them to their hideout. The youngest player begins: He turns the Krakengeist, which is enthroned on a rotating game board, as far as his die indicates. The gobbling spirit that is to be caught this round now appears in the viewing window. This is not so easy! The bulging spirits all look damn alike.

The highlight: the viewing windows in the game board magnify everything that is on the seabed as if by a drop of water. Whoever discovers a ghost can secure the water monster and bring it to its hiding place. As soon as a player has nine ghosts, he has won.

Additional rules for playing for two and for adult players complete the game. 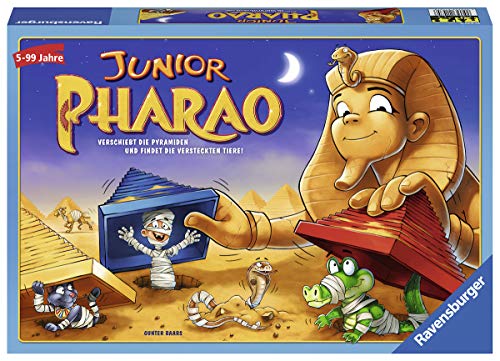 The junior edition of the classic game The Scattered Pharaoh offers exciting adventures for children. Hidden under pyramids and in the desert sands, they have to dig up small treasures. Skillfully moving the pyramids searches for a given animal (e.g. cat, camel or monkey) or a mummy. The player who finds the way without encountering another animal is allowed to keep his treasure. In the end, the winner is the player who was able to collect the most treasures, i.e. who found the most animals and mummies.

We find: Like the game for the grown-ups, Junior Pharao impresses with its particularly pretty graphics. The three-dimensional pyramids that the players slide across the playing field in their search ensure that children are drawn into the play adventure in an atmospheric way. 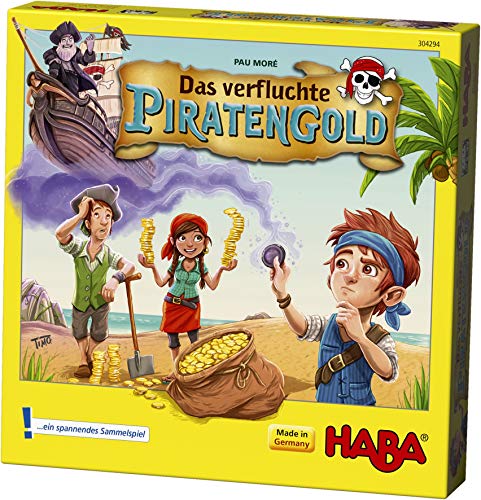 Four players find a pirate treasure on the mysterious Black Island. But be careful – there are also black thalers hidden between the gold coins! These were cursed by the pirate Captain Black. If someone wants to steal the pirates’ treasure, the coins call them back to the island.

In each round the players take turns drawing coins from a bag. If you have only drawn gold coins, you can keep all of them and put them in your own treasure chest. But if a player catches a black coin, all gold coins have to be put back in the bag, Captain Black sails towards it. Once the pirate ship has driven around the island, the game is over and the player with the most treasure cards wins.

We find: Pirates always go! Children find the topic exciting, the treasure hunt is a real adventure. The prospect of Captain Black coming to defend his treasure increases the tension among young and old. The three-dimensional game board is also beautiful, the game coins are packed in the treasure chests underneath the board. 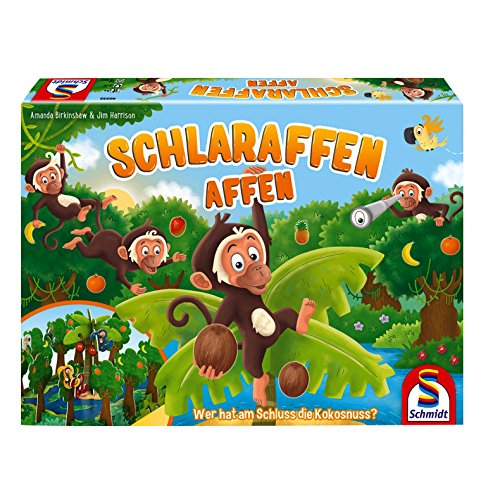 The monkeys in the monkey forest love coconuts. In order to capture the fruits, they shimmy from tree to tree, sometimes they even hang on to other monkeys in order to move faster. The little monkeys can move depending on how the die is thrown.

If the diced fruits hang on the next tree, you can move your monkey there. If the cockatoo is rolled, it blocks the tree for all players. The golden palm symbol on the cube takes you to the large palm tree on which the coconuts are hanging. If another monkey is hanging on the tree in front of you, you can hang on and travel with you.

We find: Even setting up this game is fun for young children, as a real jungle is being created here with lots of trees for the monkeys to clamber along. In order to fill the coconuts with the matching colored chips, however, it takes the help of parents or older siblings.

5. The mysterious magic lake, from 5 years 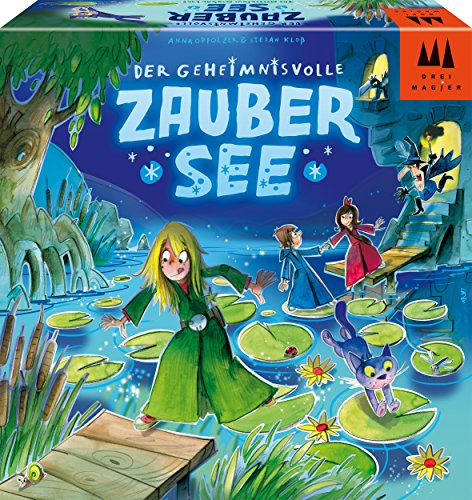 The little magicians Vicky, Mila and Conrad want to escape from the dark castle Rabenfels with the cat Kasimir. Your way leads across the mysterious magic lake. The magician Rabenhorst tries to stop the children by casting a spell on the water lilies. Help comes from the equally magical inhabitants of the lake.

If a player moves his figure across the playing field, it can happen that he is suddenly caught as if by magic. Rabenhorst has a hand in this. You can only move on if the drawn tile matches the lily pad. When a player draws the Rabenhorst tile, the lake starts to boil. All figures move back towards the castle. At the same time, Rabenhorst moves out of his castle.

The special thing about it: When all the pieces have reached the safe shore, the game is over and all players have won. If Rabenhorst came to his target field beforehand, they all lost together.

We find: The mysterious magic lake is a cooperative game. Either all players win here – or none. Each player can move any pawn on his turn. The magical graphics, the exciting mechanism and the high-quality play material cast a spell on children and parents. 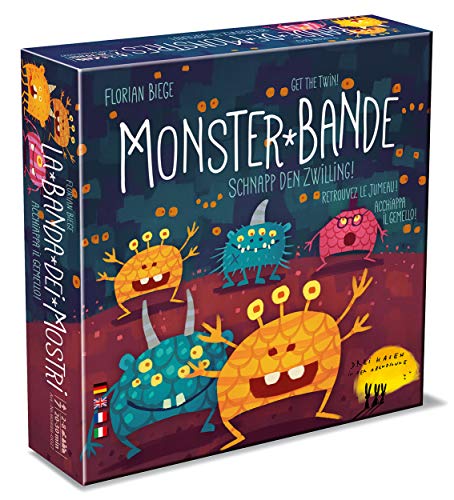 A monster rarely comes alone. In the Monster Gang game, two to eight players (groups can also be formed) look for the twin brothers of the little monsters. Each of the 54 monsters is represented exactly twice in the game, once with a blue back and once with a red card.

While the blue monster cards are face up on the game table, the red ones are face down. Two dice indicate what cannot be revealed about the monster you are looking for: Does it have ears, horns or glasses? What color is the monster, is its mouth open or closed?

The game is played against time, an hourglass sets the pace. During this time, the team tries to find as many monster brothers as possible. Anyone who makes a promise and provides forbidden information about the animal they are looking for must put their monster back. The team that collects the most monsters wins.

Monster Gang also has additional rules for playing for two or three people and for small children. There is also a memory variant.

We find: The little monsters are illustrated in a child-friendly manner and look very funny. The game material is of high quality, as are the beautiful wooden cubes. The rules are short and easy to understand. All in all, the game published by Three Rabbits in the Evening Sun is a great game for young school children.

Tip: Play along! Don’t leave your children or grandchildren alone with the board game. Explain the rules of the game more often, invent little stories and anecdotes about the course of the game. Playing in a community is twice as much fun.