Using public astronomical data and an Artificial Intelligence algorithm, researchers at the Institute of Astronomy at the University of Hava no Mānoa produced the largest 3D catalog of stars, galaxies and quasars in the world. The file, of approximately 300 GB, is available for consultation by scientists and enthusiasts.


The team used data from the Survey Survey Telescope and Rapid Response System (Pan-STARRS1) in Haleakalā, Hawaii. The database represents the largest deep multicolor optical survey in the world, covering three quarters of the sky.

Astronomers applied the new computational tools to the catalog to classify which of the three billion objects are stars, quasars or galaxies – for the latter, the software also derived estimates of their distances. This machine learning approach achieved an overall rating accuracy of 98.1% for galaxies, 97.8% for stars and 96.6% for quasars. Estimates of galaxy distance are almost 3% accurate. 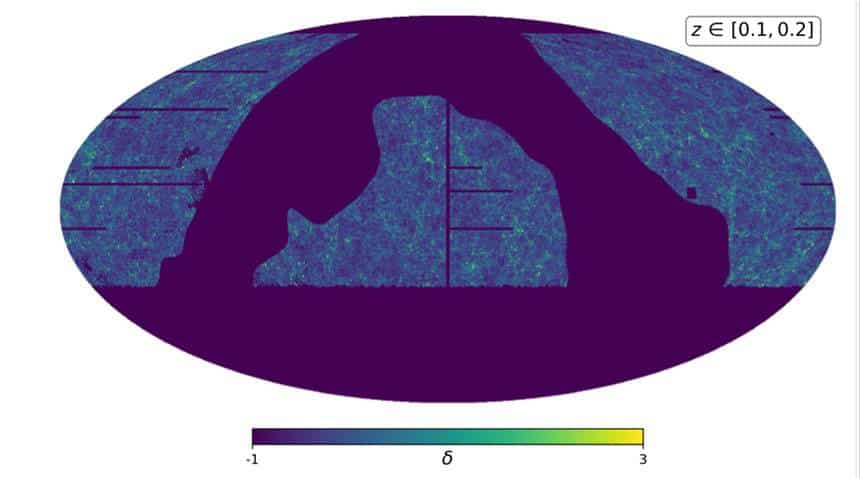 Density map of the universe, for galaxies between 1.5 and 3 billion light years away. Image: UH / Divulgao

The result is a huge database accessible via the MAST CasJobs SQL interface or by downloading as a readable table. “Using a state-of-the-art optimization algorithm, we took advantage of the spectroscopic array of nearly four million light sources to teach the neural network to predict types of sources and distances from galaxies, while correcting light extinction by dust from the Via Lctea “, explains the study’s main author, Robert Beck.

The largest map in the universe so far has been created by the Sloan Digital Sky Survey (SDSS), which covers only a third of the sky. The new catalog doubles the area surveyed, has more statistics and specific areas than SDSS does not cover.

“As Pan-STARRS collects more and more data, we will use machine learning to extract even more information about objects close to Earth, our Solar System, our galaxy and the universe,” says Pan-STARRS director Ken Chambers.

Via: University of Hawaiʻi at Mānoa