As usual, we reached the end of another month and the platform benchmark AnTuTu launched the ranking of the most powerful Android smartphones today. The classification published by the company takes into account data collected between the 1st and 30th of June, leaving us with an excellent idea of ​​which smartphones to consider if performance was the most important point.

However, it is important to emphasize that these results may not reflect the performance of smartphones in their daily use, being advised to only use them as a reference and form of comparison. 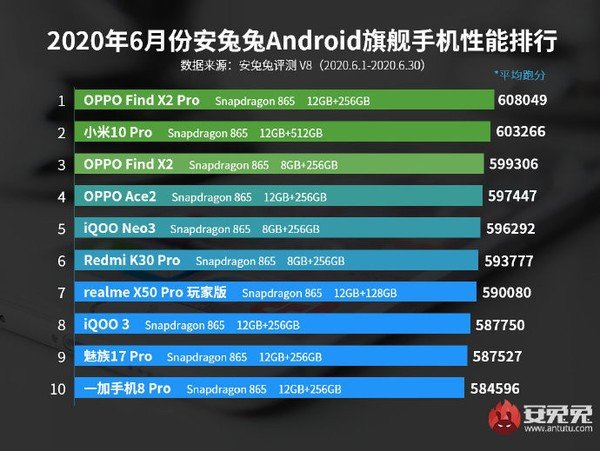 This month’s list presents some surprising information, such as the presence of only one Xiaomi smartphone in the TOP5 (Xiaomi Mi 10 Pro in second place). Another surprise is Oppo’s total dominance in June, with 4 devices at the top of the table.

The Oppo Find X2 Pro is the most prominent smartphone during the month of June, presenting itself as the most powerful Android smartphone according to AnTuTu.

Table Of Contents hide
1. Qualcomm does not give MediaTek a chance in the high-end smartphone segment
2. Xiaomi continues to dominate the ranking of mid-range smartphones

In addition to these classifications help us to understand which are the most powerful smartphones of today, they also help to have a better idea of ​​which processors with greater capacities. In June, it is impossible to have doubts, with Qualcomm dominating the table completely.

All 10 smartphones integrated in the TOP10 most powerful smartphones, are equipped with the Qualcomm Snapdragon 865 processor, confirming that this is the best processor today for Android devices. 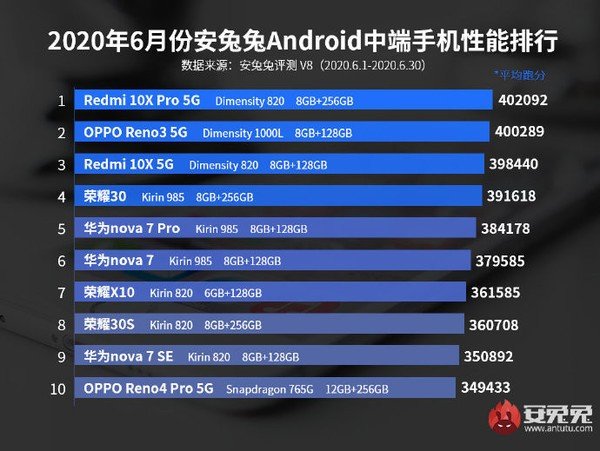 Xiaomi continues to dominate the ranking of mid-range smartphones

Regarding the mid-range segment, Xiaomi continues to achieve maximum prominence thanks to the Redmi 10X Pro 5G. Still, it is curious to see that in this segment it is Huawei / Honor that has the greatest presence, with a total of 6 smartphones in the TOP10.

We also have some surprises regarding processors. If in the high-end segment Qualcomm does not give a chance to the competition, in this segment the exact opposite happens. MediaTek is dominating with its new Dimensity processors, followed by Kirin processors manufactured by Huawei.

Qualcomm has only one smartphone on this list (Oppo Reno4 Pro 5G) that occupies the last position, being equipped with the Snapdragon 765G.